Ireland has a well-revered education system, with five of Ireland's universities placed in the top 500 universities on the QS World University Rankings. Located at the edge of Europe, Ireland is an island nation with distinct characteristics. The country is popular for its rich history, culture, and vibrant nightlife, making it one of Europe's most visited tourist attractions.

Also, Ireland is one of the more attractive study abroad destinations for many international students. Academic excellence, internationally recognized degree courses, bustling campus life, abundant opportunities in the research sector, etc, are some of the features making the Irish education system one of the best in the world. If you, too, are planning to study in this Irish country, let’s explore Ireland education in detail.

Highlights of the Education System in Ireland

The education system in Ireland is structured to overcome the barriers coming in the way of overall development of students. The institutes and universities in Ireland have been working to promote Ireland as one of the top study destinations for international students. They have a goal to provide top-quality education at a comparatively low cost.

Following are some of the highlights of the Irish education system:

Suggested: Cost of Studying in Ireland

Let us learn in detail about the Irish National Framework of Qualifications (NFQ), its purpose, and how it benefits learners. Learning about NFQ levels will help you better understand the qualifications and training systems in Ireland. NFQ is of immense significance as it has helped make the education system in Ireland one of the best.

What is the National Framework of Qualifications (NFQ)?

The Irish National Framework of Qualifications (NFQ) was established in the year 2003. It is a 10-Level single national identity developed by the National Qualifications Authority of Ireland to measure all learning achievements and to describe levels of educational qualifications in Ireland. The Irish NFQ system is compatible with the ENIC-NARIC (European Network of Information Centres/National Academic Recognition Information Centres) that facilitates academic qualifications recognition throughout Europe and in nations like the USA, New Zealand, Canada, and Australia.

Why is NFQ Important for International Students?

International students are advised to assess their qualifications using the Irish NFQ (National Framework Qualifications) prior to applying for a course in Ireland. It helps them compare and contrast qualifications easily to plan their studies, training, and progress in their career. NFQ helps international students choose the right course. The information about the awards given after a course completion can help you ascertain if the course meets your need for education.

A quick glimpse of higher NFQ levels for degree programs:

Next, let’s check the glimpse of higher NFQ levels for degree programs:

The following table provides an overview of all the 10 NFQ levels, the degrees or certifications awarded at each level, and how the NFQ level in Ireland compares to the European Qualification Framework (EQF).

Thus, the NFQ level in Ireland sets the standards of Irish education qualifications. The NFQ measures and compares the learning standards and achievements of qualifications and helps students in moving ahead from one study level to another. Since the standard followed under NFQ is at par with that of the European Qualification Framework (EQF), the degree obtained by students gets accepted globally.

The Irish government focuses to impart quality education to all. Thus, it has made education obligatory for children from age 3 to 16 or till the time a student completes his/her 3 years of post-primary education. The Irish education system & structure is quite similar to that of the UK. Education in Ireland is broadly divided into four different levels, like primary, second, third-level, and further education. 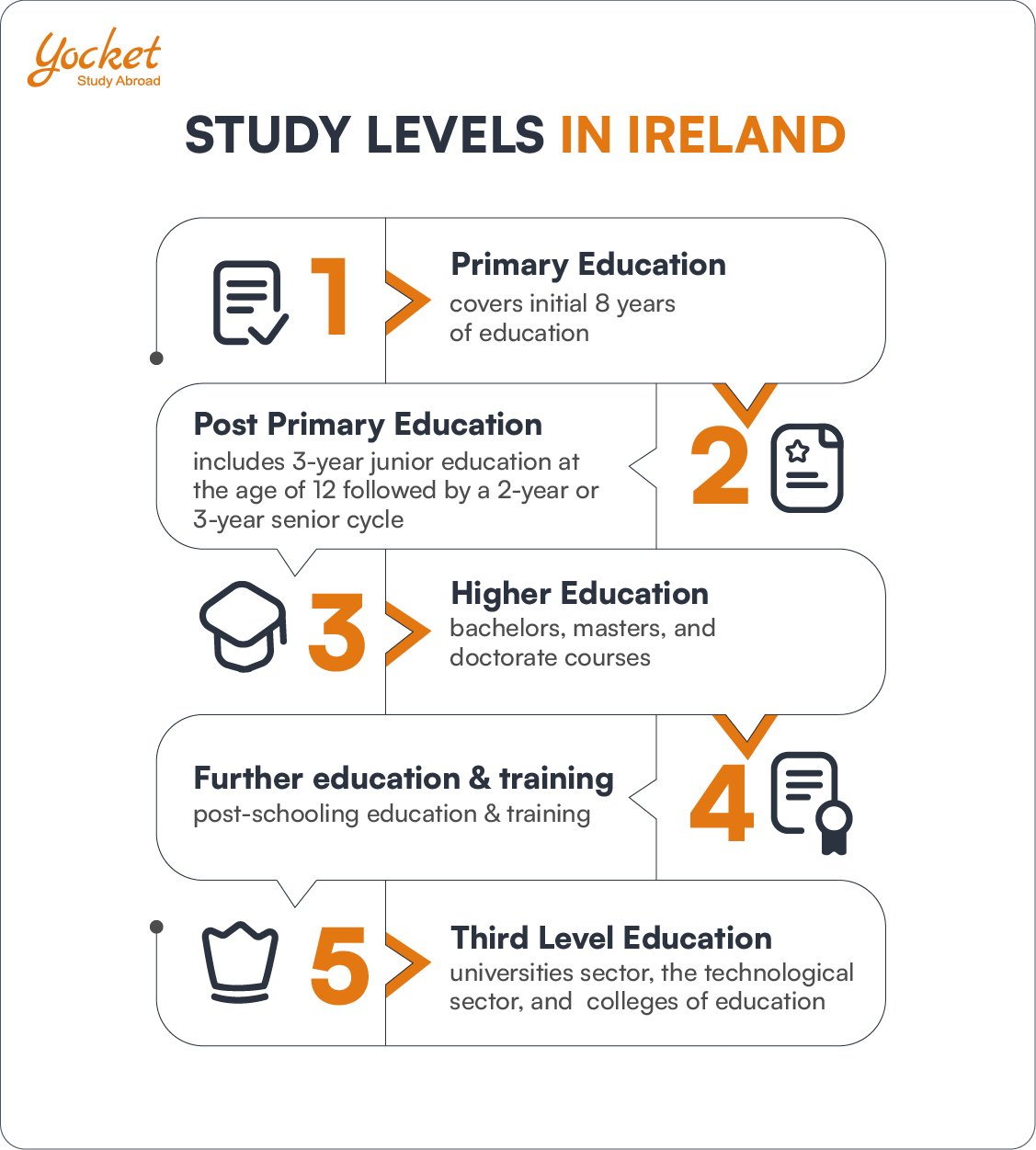 Below are the four education levels in Ireland education system for international students.

Children in Ireland don’t have to attend school until they are 6 years old, but they can start attending school following their fourth birthday. The entire Irish primary school curriculum is child-centred, and emphasis is laid on the overall development of children. Primary schools in Ireland are mostly owned by religious communities or groups but are funded by the State. It covers the initial 8 years of the education period.

This begins at NFQ level 6, and the Third-level includes many sectors focused on making quality learning accessible to all learners. Level 3 higher education comprises universities, institutes of technology, and colleges of education getting funds from the State. Also, there are numerous independent private colleges offering bachelor, master, and doctorate level courses to both national and international students. It includes degree and non-degree programs.

Third level education is made of sectors that are funded by the state including:

Suggested: Cost of Studying in Ireland

Now you know the education levels Ireland. Next, let’s explore the top institutes to study from.

Next, let’s check out the…

Some of the Best Universities in Ireland for International Students:

We hope the information on levels of education Ireland and other topics in the article has helped you better understand the education system in Ireland. If you are considering to study in Ireland and are on the lookout for professional help, then connect with our expert counsellors by choosing Yocket Premium.

Ans. Education is definitely one of the best education destinations for higher education. The country provides high-quality education, various job opportunities, and an enjoyable lifestyle.

Ques. What is the cost of studying in Ireland universities?

Ques. What are the admission requirements in Ireland education?

Ans. Following are the requirements for Ireland admissions:

Ques. What is the age limit to study in Ireland?

Ans. The students must have completed their 16th year before enrolling in Ireland universities. There is no upper age limit for education, though.

Ques. Can students stay in Ireland to find jobs?

Ans. As per the Third Level Graduate Scheme permission, the Irish Government offers an opportunity to students who have graduated from Irish intuitions to stay in Ireland for 24 months and find a suitable job.