A GROWING NUMBER OF INTERNATIONAL STUDENTS IN THE U.S. AND CANADA

When I first arrived in the U.S. for college, in 1999, I was one of roughly half a million international students. The number stagnated for the next six to seven years in the wake of 9/11, but then picked up again at great speed. Today, over a million international students — 1,078,822 to be exact — are attending U.S. colleges and universities. This represents a 3.4 percent increase over 2016 and a two-fold increase over the last decade, according to the latest Open Doors report by the Institute of International Education (IIE). This increase has been driven in part by Chinese and Indian students, who make up half of all international students in the U.S., and whose numbers have grown by 6.8 percent and 12.3 percent, respectively, since last year.

Data for 2016–2017 confirms that the flow of new students arriving in the U.S. remained steady at 290,836, in line with the record-breaking years of 2014–2015 (293,766) and 2015–2016 (300,743). Had the governments in Brazil (32 percent year-over-year decrease) and Saudi Arabia (14 percent year-over-year decrease) fully maintained their generous scholarship programs, it’s even possible the U.S. would have had an increase in the overall flow of new international students arriving this year.

To some, this trend of continuing high numbers may be surprising given the current White House’s attitude towards immigration (e.g., the Mexican border wall, travel bans and the DACA rescission to name just a few tweets). Yet, according to IIE, the consistent yearly growth in international students over the past 60 years has shown a certain resilience from the volatility in U.S. politics. 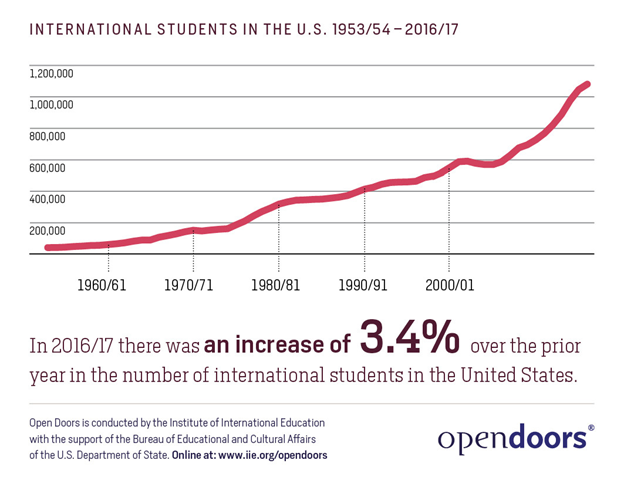 $49 BILLION IN DIRECT ECONOMIC IMPACT, AND MANY TIMES THAT AFTER GRADUATION

International students play a large role in a country’s economic growth. The combined 1.5 million international students in the U.S. and Canada contribute about 49 billion USD every year in direct spend on tuition and other expenses. To put that amount in perspective, 49 billion dollars is greater than the GDP of about half the countries on the planet. And these numbers account just for their time in school — immigrant students go on to have even more economic impact after they graduate. For instance, a 2016 survey by the National Foundation for American Policy found that roughly half of unicorn companies in the U.S. (startups valued at over $1 billion) had at least one immigrant founder. According to the study, “The collective value of the 44 immigrant-founded companies is $168 billion, which is close to half the value of the stock markets of Russia or Mexico.”

The fundamental forces behind international student growth point to continued increases for many years to come. The Open Doors 2016 presentation suggests that the top factor driving the increase is the population growth in other countries. There are 1.2 billion people in the world between the ages of 20 and 30. Compare that to the 24 million college students in the U.S. and Canada, and it’s easy to see why even a minor fraction of this huge pool of candidates attending university in the U.S. or Canada could have a major impact. In addition to population factors, the challenges students sometimes face when trying to get into the limited and competitive seats in universities in their home countries has also driven international students to seek a top education overseas.

Finally, though a world-class education is invaluable, it also pays-off for the students themselves big time. An analysis at my company, MPOWER Financing, which finances high-promise international students at top universities in the U.S., suggests that the median annual income for student applicants from India (MPOWER’s largest market) prior to coming to the U.S. for a master’s degree is under $20,000. Their salary after obtaining a U.S. degree ranges from two to seven times this amount, depending on whether the students return home or stay in the U.S. to work, as well as which company and position they end up in.

A STRONG TREND THAT SHOULD BE EMBRACED

We’re witnessing a remarkable impact that international students coming to the U.S. and Canada are having on our respective countries. Given international students’ economic value both during and after their academic programs, this is a trend that we should all be embracing and encouraging to continue.

But, we’re seeing very different political attitudes about these students in the U.S. from those in Canada. Canada has made attracting and retaining top global talent a federal priority through a proactive outreach strategy and its express entry permanent residency program for skilled immigrants. The U.S., by contrast, has yet to increase the number of available H1B visas to a level adequate with high-skilled demand, has postponed the startup visa program and still lacks a timely path to residency for international talent. Several leading media outlets, from the New York Times to The Economist have argued that these differences, combined with generally lower tuition costs in Canada, have contributed to a sharper increase in the number of international students in Canada compared to the U.S.

To take full advantage of the continuing growth in international students and their economic benefit on their host countries, the U.S. would do well to adopt some of the best practices from its northern neighbor and encourage the growth of this enormous pool of talent.

Emmanuel “Manu” Smadja is the co-founder and CEO of MPOWER Financing, a fast-growing FinTech startup that provides educational loans to high-promise international students at top universities in North America. Manu was an international student himself and is a firm believer that credit should be borderless and should consider people’s future earning potential.

Note: This is a featured article. This article is not curated by Yocket.